U.S. Hiring Continues to be Strong, with Job Openings Even Stronger in April

Broad-based growth led by financial services and manufacturing sectors, according to the iCIMS Monthly Hiring Indicator

HOLMDEL, N.J. [May 2, 2019] – The U.S. labor market continues to look strong, with new hires across most sectors, regions and cities. New hires rose 1.7% and new job openings were even stronger, with a 13.8% rise on a seasonally-adjusted basis in April, according to iCIMS’ Monthly Hiring Indicator (MHI). The continuing rise in hires and job openings is likely to increase wage pressures, as employers compete for workers in the already-tight labor market.

The MHI is a leading economic indicator published by iCIMS, drawing upon its database of more than 75 million applications and 4 million hires each year. New hires translate directly into payroll growth, after netting out departures, layoffs and other separations. 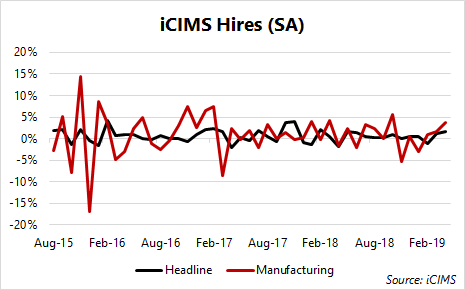 “The iCIMS Monthly Hiring Indicator for April shows another month of healthy hiring growth,” said Josh Wright, chief economist at iCIMS. “There are little or no signs of the labor market losing steam, despite the bumpiness in other areas of the economy. Regardless of tame inflation, it is going to be increasingly costly to find and hire people, whether via the recruiting efforts to find good candidates or the wages needed to get them in the door.”

iCIMS is the talent cloud company that empowers organizations to attract, engage, hire, and advance the right talent that builds a diverse, winning workforce. iCIMS accelerates transformation for a community of approximately 4,500 customers, including nearly half of the Fortune 100, that employ more than 35 million people worldwide. For more information, visit www.icims.com.