Strong Rebound in Hires and Job Openings in March

Following a slowdown in February, employers’ hiring activity and need for new employees is back on the upswing, according to the iCIMS Monthly Hiring Indicator

HOLMDEL, N.J. [April 2, 2019] – After a dip in February, U.S. employers’ hires rose 1.6% and new job openings rose 4.5% on a seasonally-adjusted basis in March, according to iCIMS’ Monthly Hiring Indicator (MHI). The MHI is a leading economic indicator published by iCIMS, drawing upon its database of more than 75 million applications and 4 million hires each year. New hires translate directly into payroll growth, after netting out departures, layoffs and other separations.

According to our tracking data (chart below), a jump in new job openings usually precedes a rise in hires within the following two to three months. This rise in job openings at a time when the U.S. labor market is near full employment indicates that employers are going to continue struggling to find qualified candidates to fill roles in the coming months. 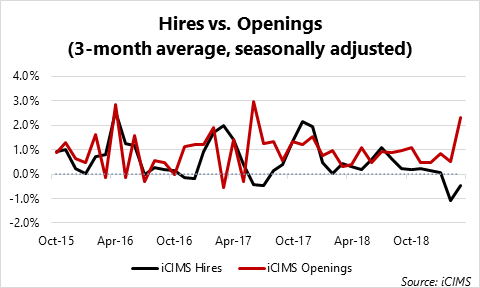 —   Growth in hires was strong across most sectors, led by manufacturing (3.8%) and business services (3.7%), on a seasonally-adjusted basis.

—   At a time when the unemployment rate is near its lowest level in decades, employers continued to open new jobs, led by the retail (13.2%) and education & health services (10.2%) sectors.

—   Cities that saw the fastest growth in hires, after factoring in seasonal adjustments, include the Philadelphia area (9.8%), Detroit (7.7%) and Miami (6%). Conversely, Baltimore had a dip in new hires, with a decrease of 7.5%.

“The job market still looks strong and the weak February payroll report appears to have been an air pocket,” said Josh Wright, chief economist at iCIMS. “It’s a job seeker’s market and a great time for upcoming college graduates to be entering the workforce. It’s going to be hand-to-hand combat among employers for the best candidates, especially with wages rising.

iCIMS is the talent cloud company that empowers organizations to attract, engage, hire, and advance the right talent that builds a diverse, winning workforce. iCIMS accelerates transformation for a community of approximately 4,500 customers, including nearly half of the Fortune 100, that employ more than 35 million people worldwide. For more information, visit www.icims.com.