What Recruiters Should Know About the Class of 2017

The Class of 2017 has graduated and is now ready to enter the workforce. Considering 81 percent of recruiters say they screen out entry-level candidates without a college degree, it’s important for employers to perfect their entry-level hiring processes and understand what college graduates are looking for in a job.

Our second annual research study, The Class of 2017 Job Outlook Report, exposes the realities for this year’s college graduates about to enter the workforce across the U.S and their career aspirations including industry, location, and salary.

Below are answers to some frequently asked questions about the Class of 2017 to help you capture the best of the new entry-level workforce.

What were the most popular majors for the Class of 2017?

The top majors for the Class of 2017 include business/finance and science, technology, engineering, and math (STEM). But just because college graduates earn a degree in a certain field doesn’t mean they’re not open to working somewhere else. Eighty-one percent of college seniors surveyed said they’d work in a field unrelated to their major, with 82 percent of recruiters saying they’ve hired entry-level employees with degrees outside their industry.

Which industries and locations are they looking to work in after graduation?

Business/finance, communication, and STEM are the most popular industries this year’s college seniors want to work in after graduation.

After deciding which industry they’d like to work in, the next important decision may be where college graduates will move to start their careers.

Once college seniors have moved out of student housing, many want to head for the bright lights and ample opportunities available within a major metro area. The top cities college seniors would most like to work in immediately after graduation are New York City (35 percent), Los Angeles (29 percent), and San Francisco (23 percent).

What should I expect to pay an entry-level employee on average?

On average, college seniors expect to earn approximately $53,483 at their first job after college. More than half of those surveyed (54 percent) said they expect $50,000 or more, a 12 percent increase from 2016. But these expectations may not be realistic. According to recruiters, on average, entry-level employees can expect to earn approximately $45,361. That’s more than $8,000 less than what this year’s college seniors are expecting.

Additionally, you may need to shell out more for those graduating with STEM degrees. College seniors earning STEM degrees expect an average of $62,247 versus the overall average of $53,463.

In fact, 97 percent of college seniors and 88 percent of recruiters agree that STEM majors will earn more than non-STEM majors for an entry-level job.

What should I look for in entry-level candidates?

Without any real-world work experience, many recruiters may wonder how to judge entry-level candidates. Our report suggests that completing internships is proving to be valuable for students and their future employers.

Of those that completed at least one internship during college, 65 percent of students reported that they learned better organizational skills, such as time or project management, and 40 percent said they learned how to use a new computer program or software.

In fact, 70 percent of recruiters believe that internship experience is more valuable than a college GPA for identifying the best entry-level talent. 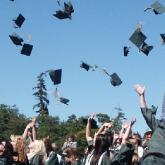