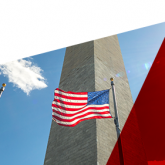 For all the air time that job creation has received in this year’s presidential campaign, there has been surprisingly little discussion of actual jobs data. In part, that disparity reflects uncertainty about exactly how and to what extent economic trends influence voting behavior, but in part it reflects the disparity in the availability of the numbers themselves. There are new polls conducted every week, often revealing detailed sub-trends for different demographic and geographic groups. In contrast, most major employment statistics are published on a monthly basis and provide relatively broad brushes of the population.

At iCIMS, we’re not pollsters or political scientists, so we won’t weigh in on the relative usefulness of polls versus economic data, or even on the relative merits of different economic data points for forecasting elections. What we do know about is hiring trends, so that’s what we’ll focus on.

Coming out of the 2012 election, press reports indicate that a limited number of counties were identified as pivotal for several battleground or swing states. iCIMS is fortunate to have data on employment trends specific to a number of those counties and in this report, we review local hiring data – focusing on Florida, Ohio, and Pennsylvania – against national and state-wide averages. In the last three presidential elections, these counties in Florida and Ohio have voted for the successful candidate, regardless of his party affiliation. In Pennsylvania, the two counties have previously voted for the Democratic nominee, but their size and tendency to vote Republicans into local office have attracted speculation that they could turn Republican, taking the state’s electoral college votes with them.

All else equal, stronger job growth should favor the incumbent party and weaker job growth should favor the challenger party. Of course, not all else is equal – least of all in the 2016 election season. This election may yet play out quite differently from historical precedents, and we will leave it to the political scientists to weigh the many complicated forces at play here. But few would deny that these hiring trends shed a unique light on what is shaping voter sentiment in some of the highest-stakes communities in the country. 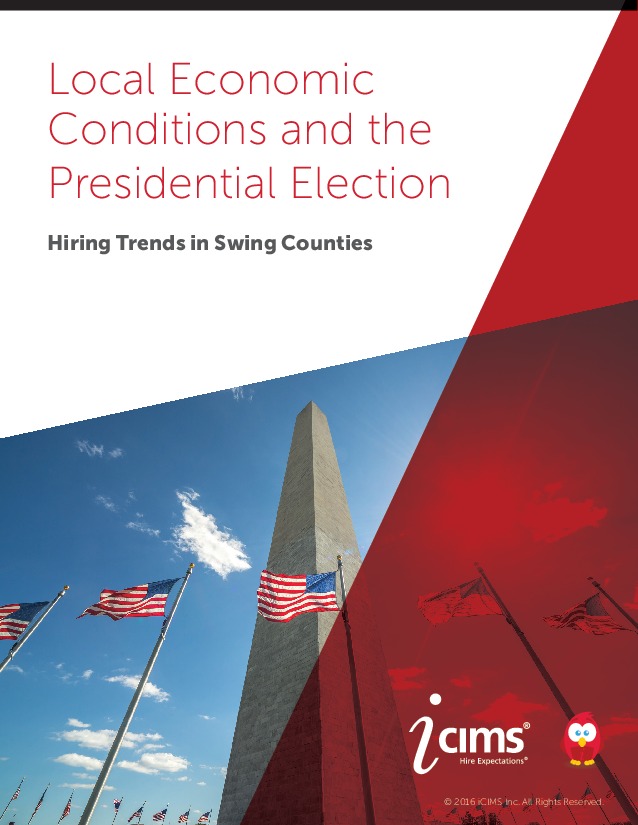 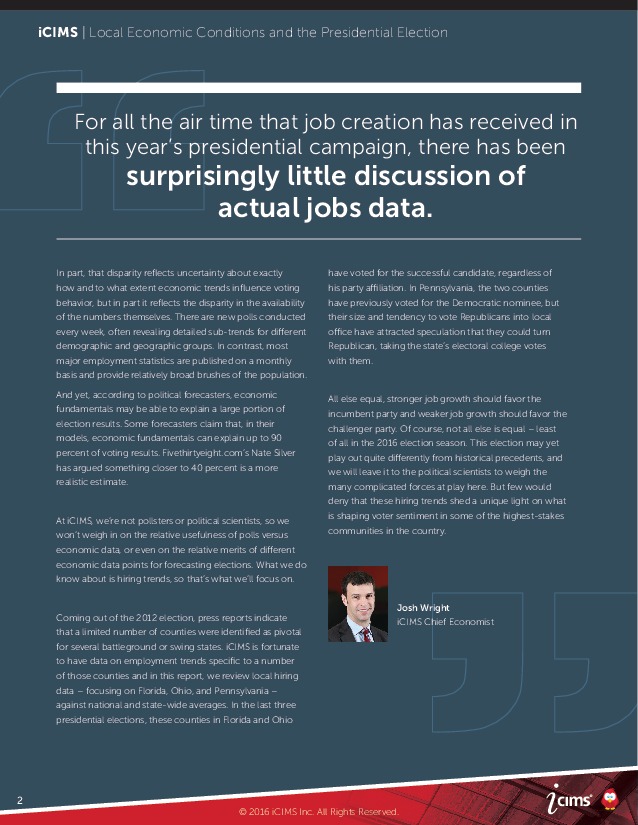 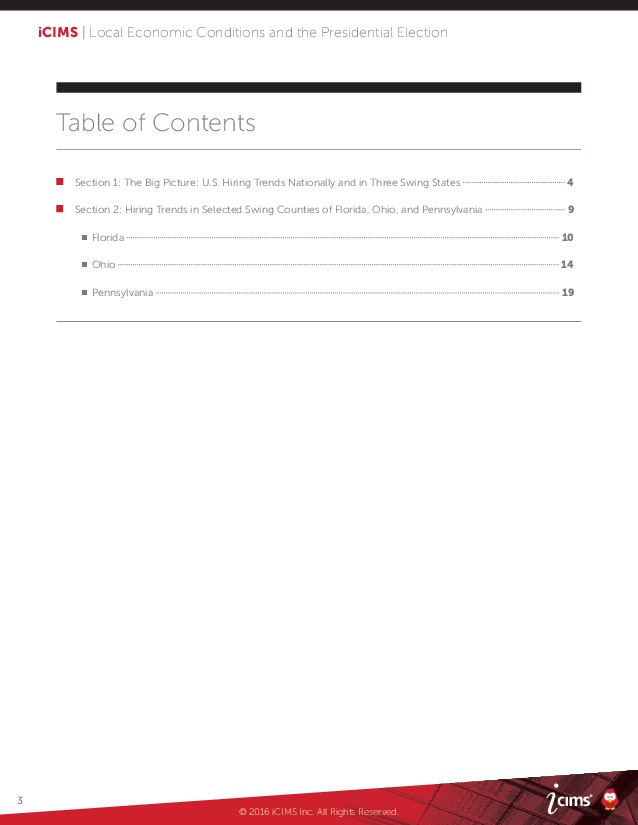 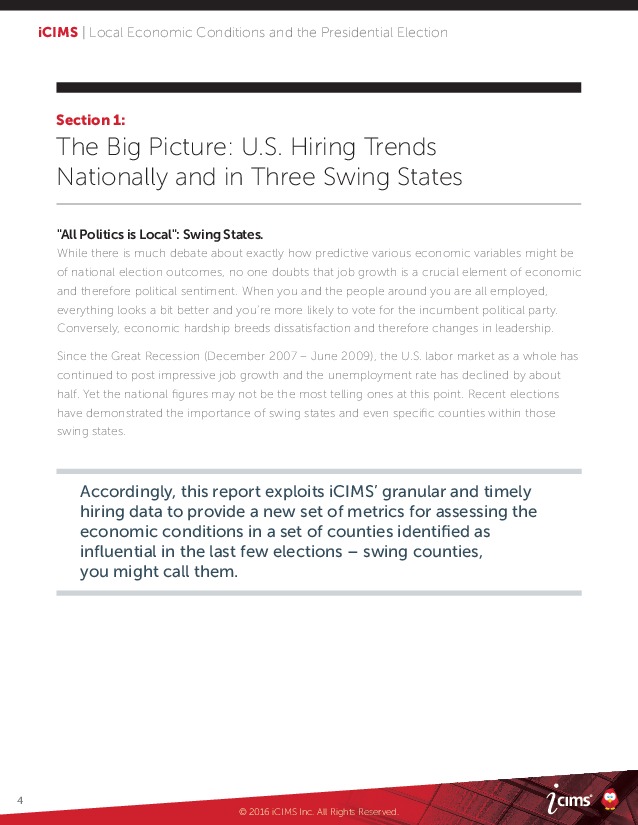 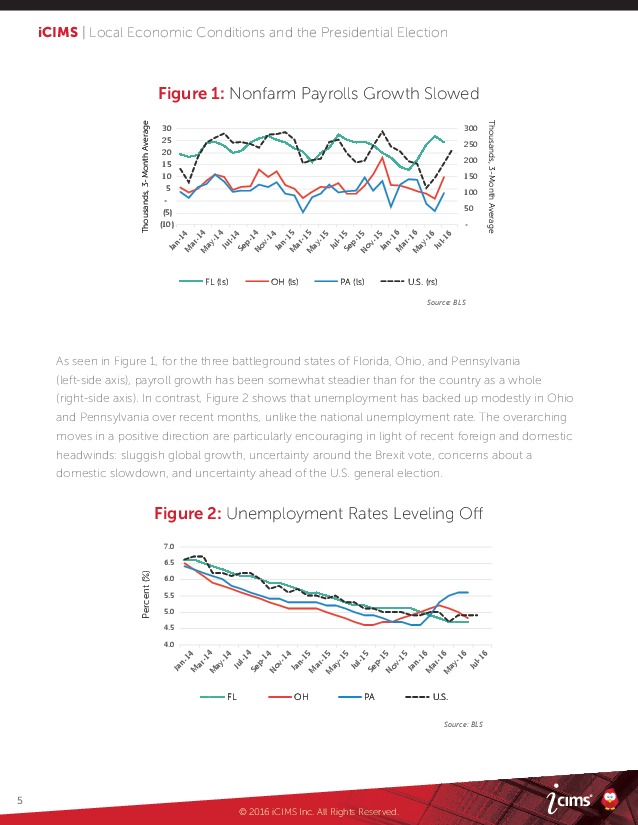 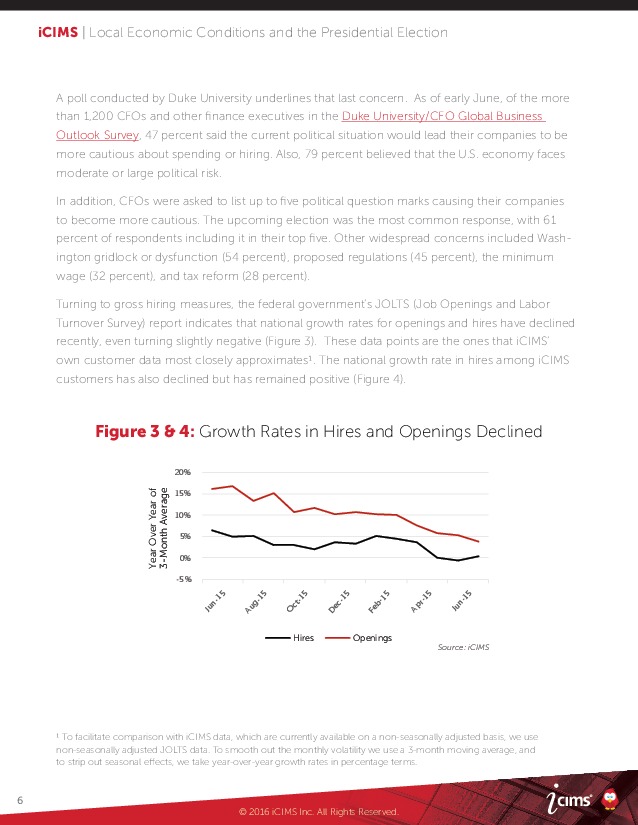 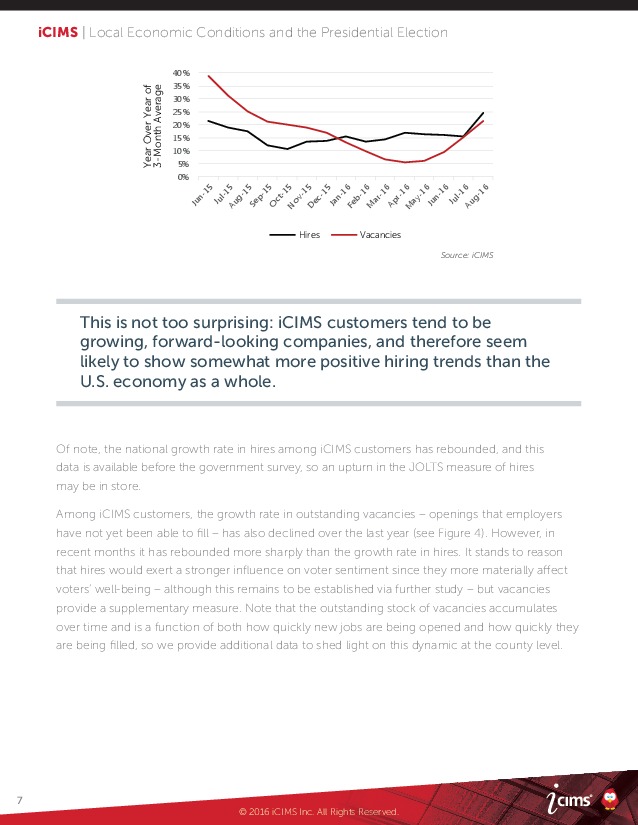 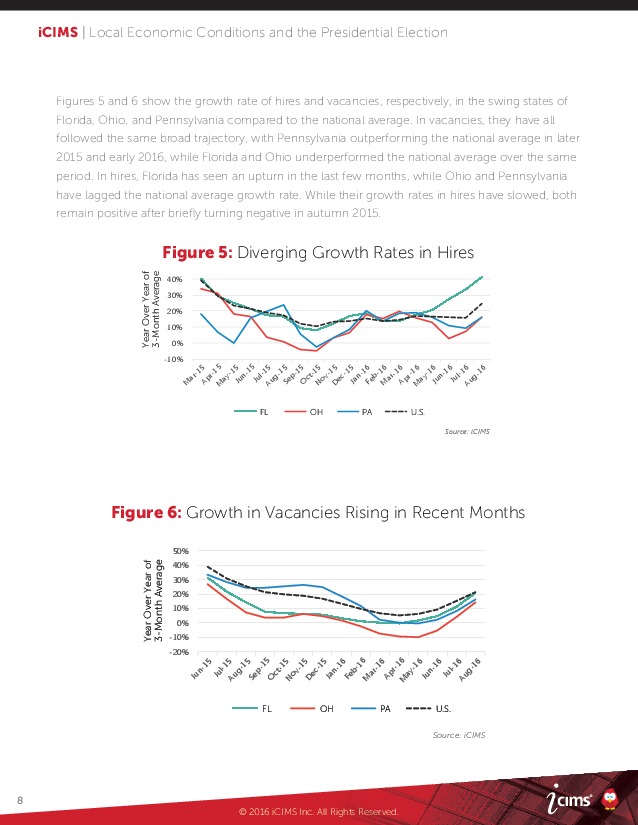 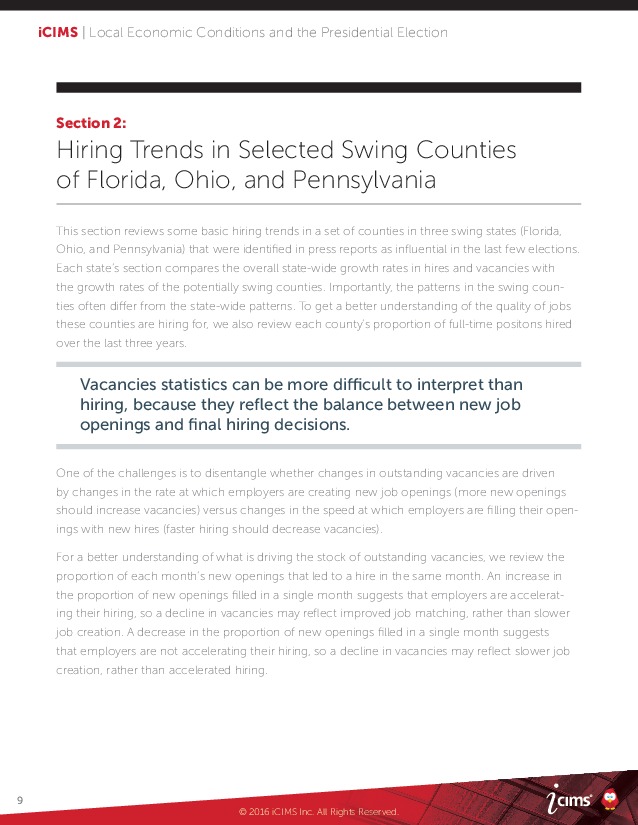 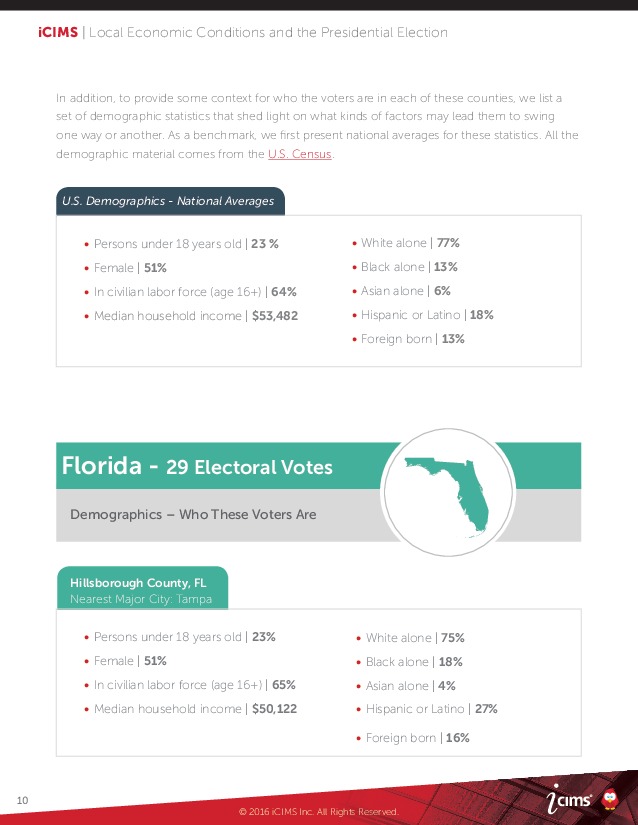 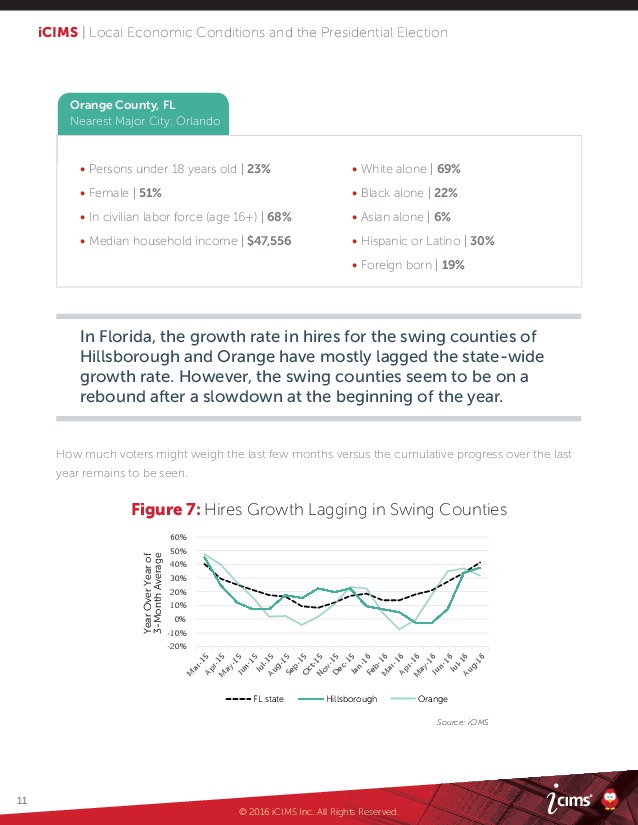 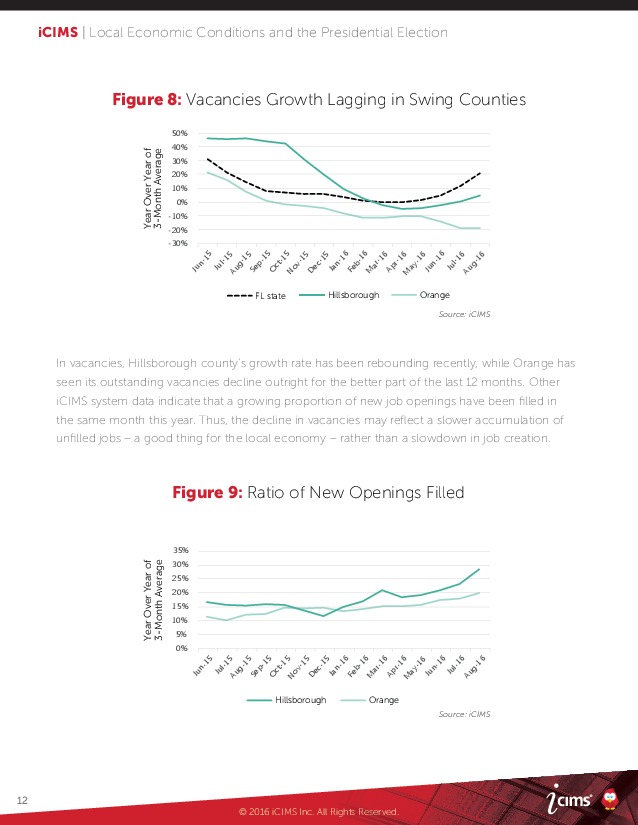 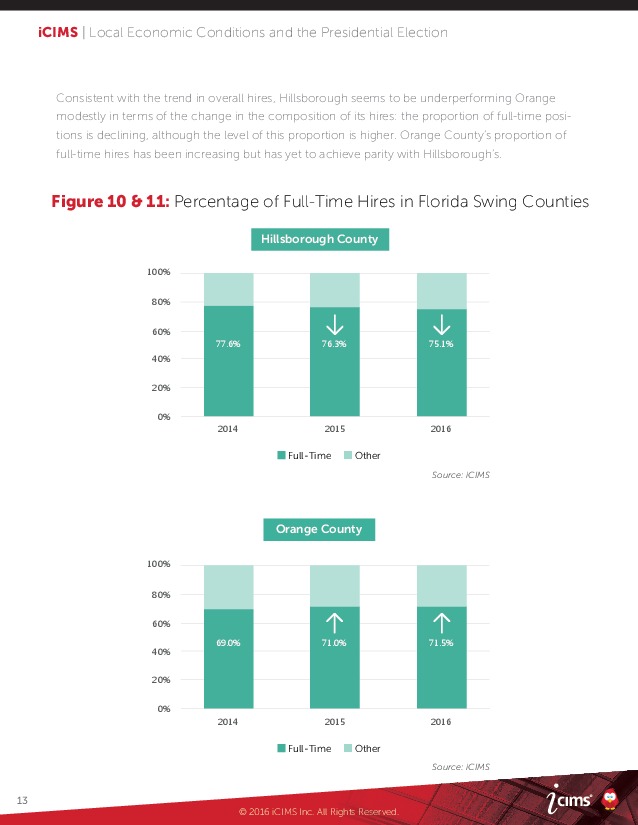 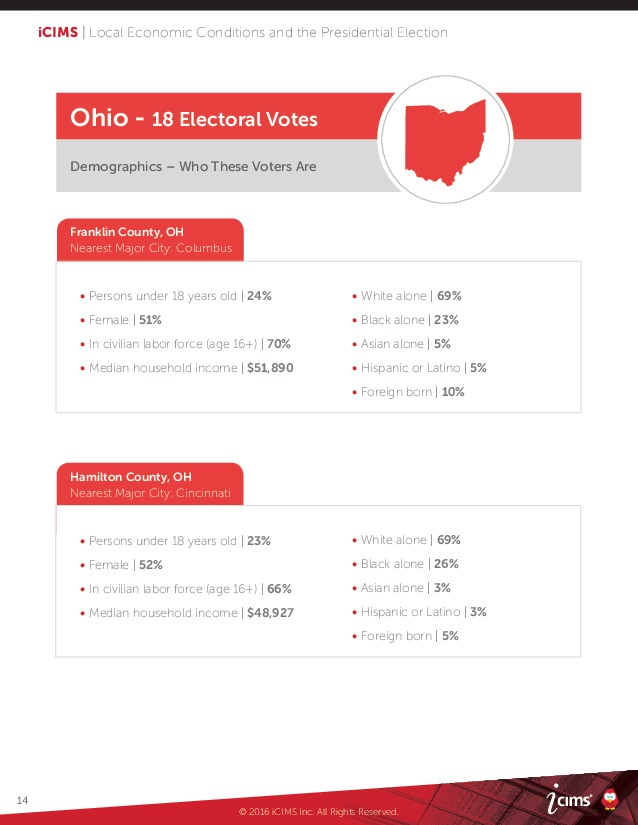 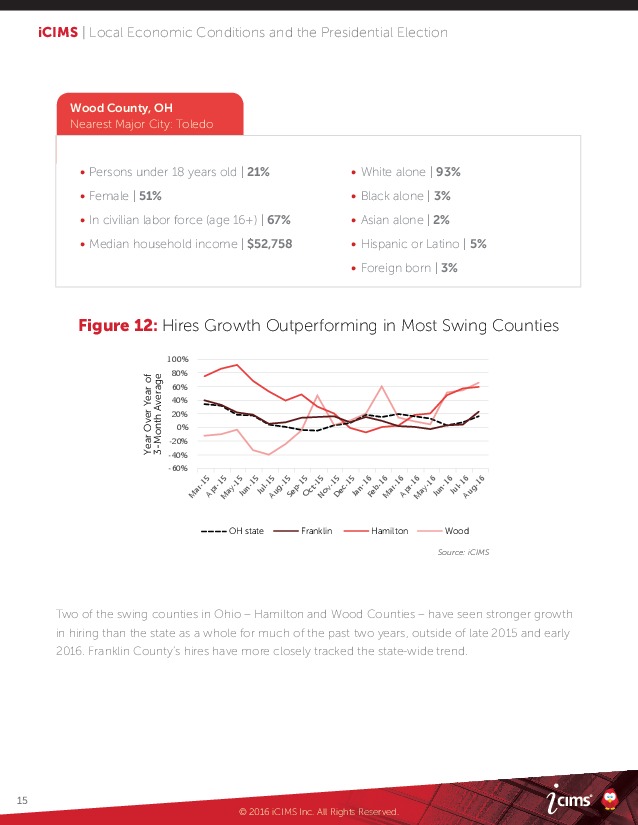 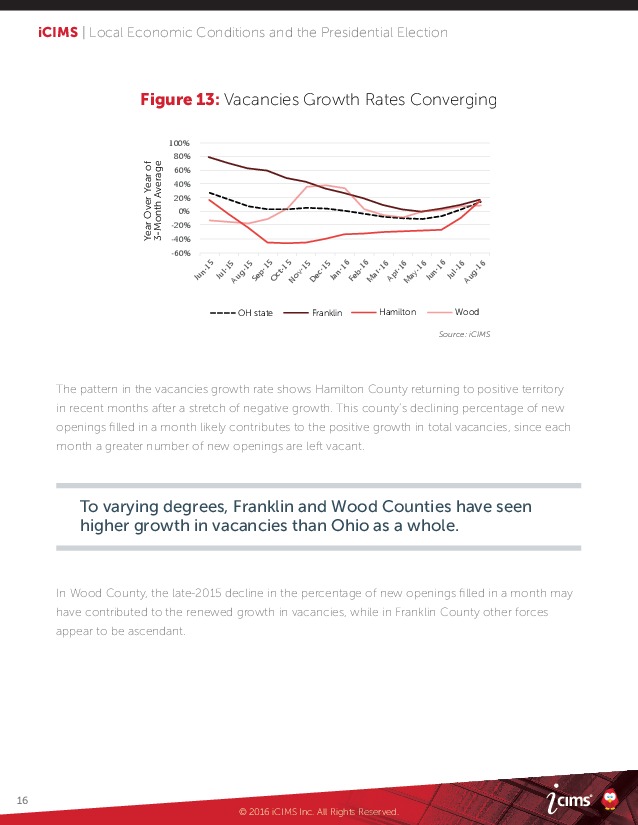 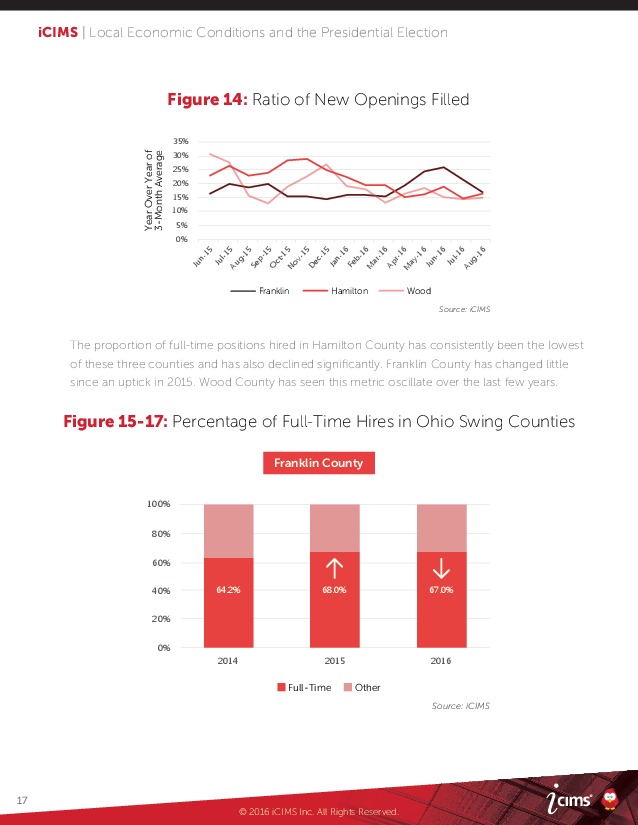 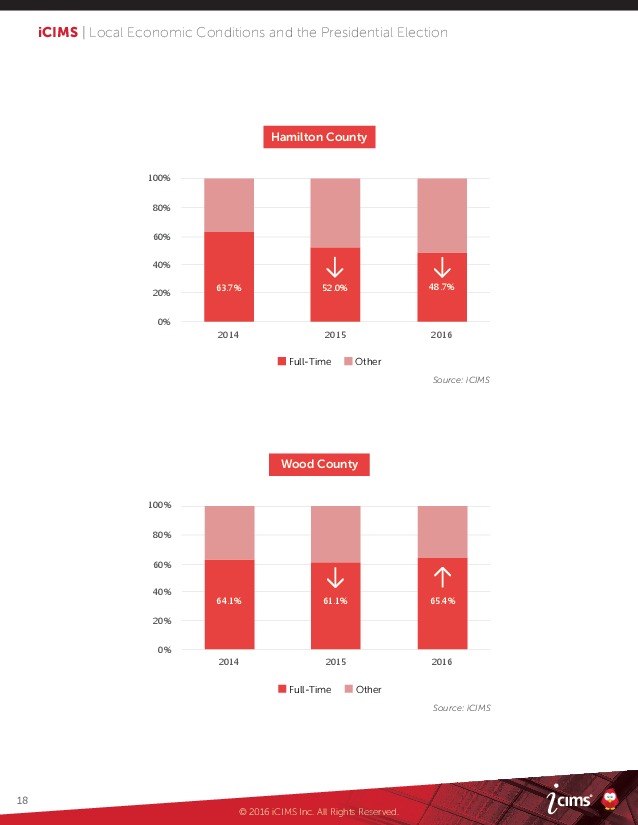 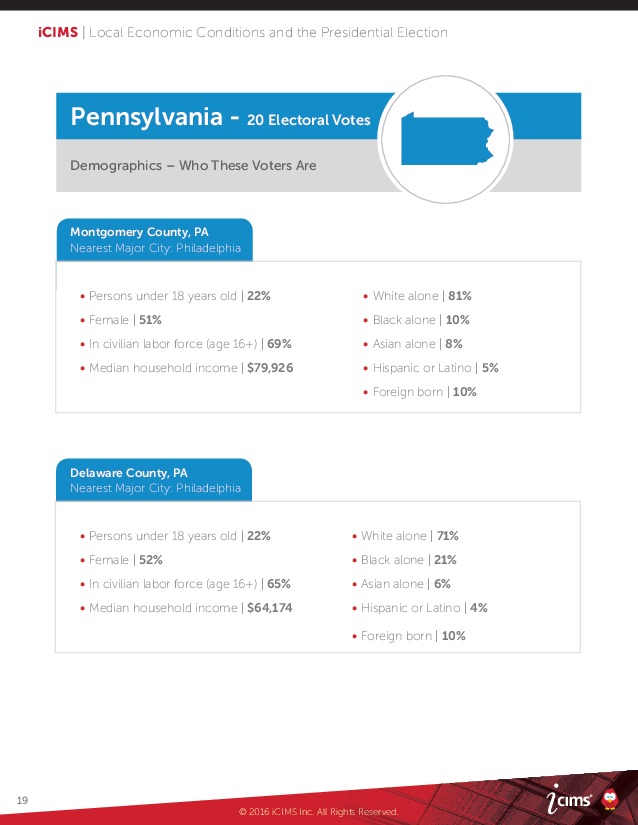 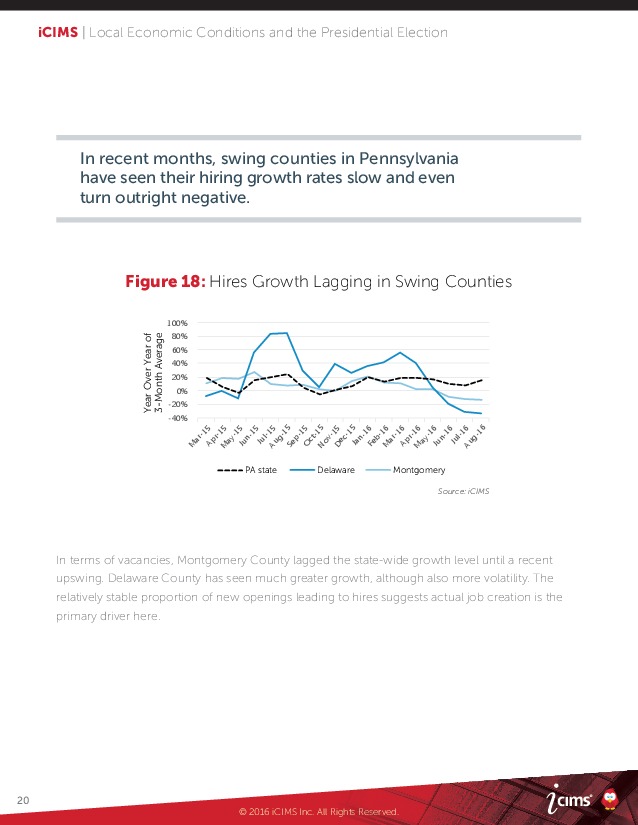 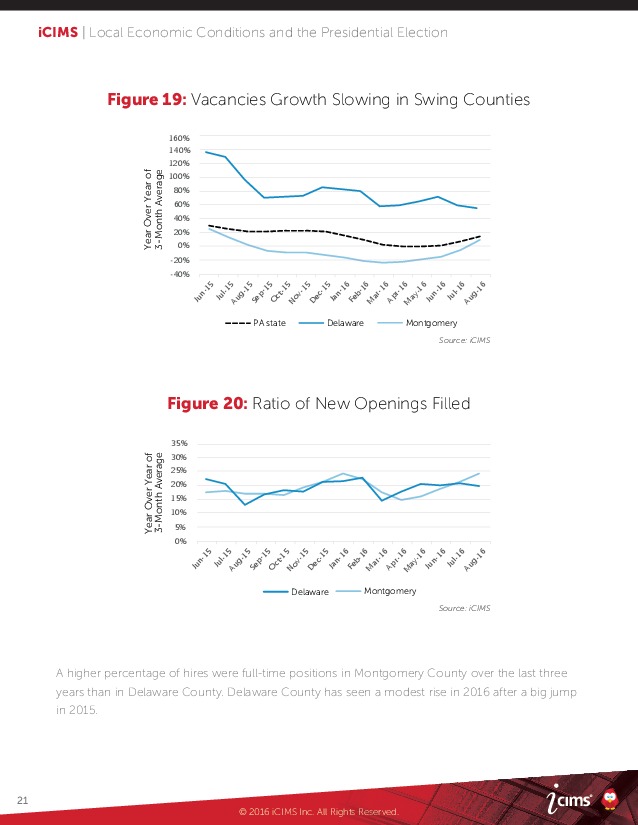 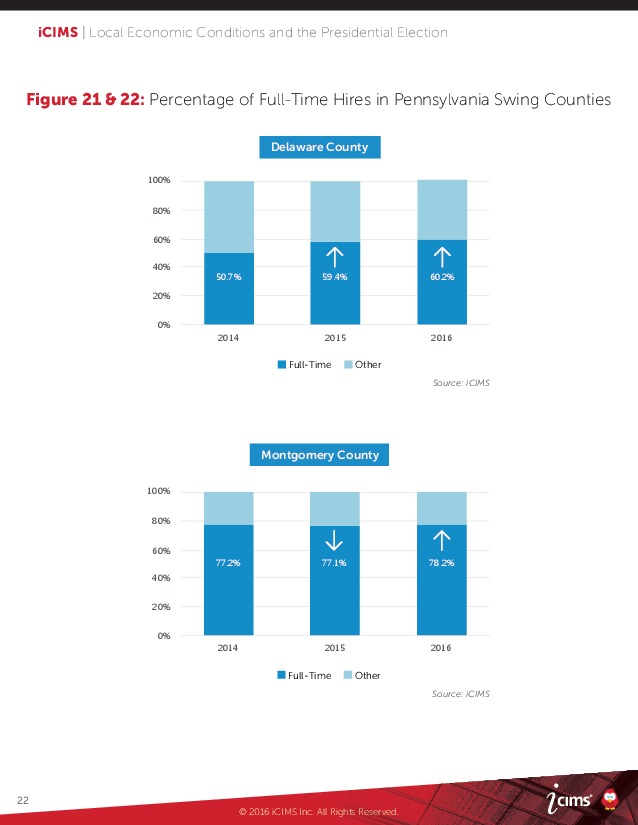 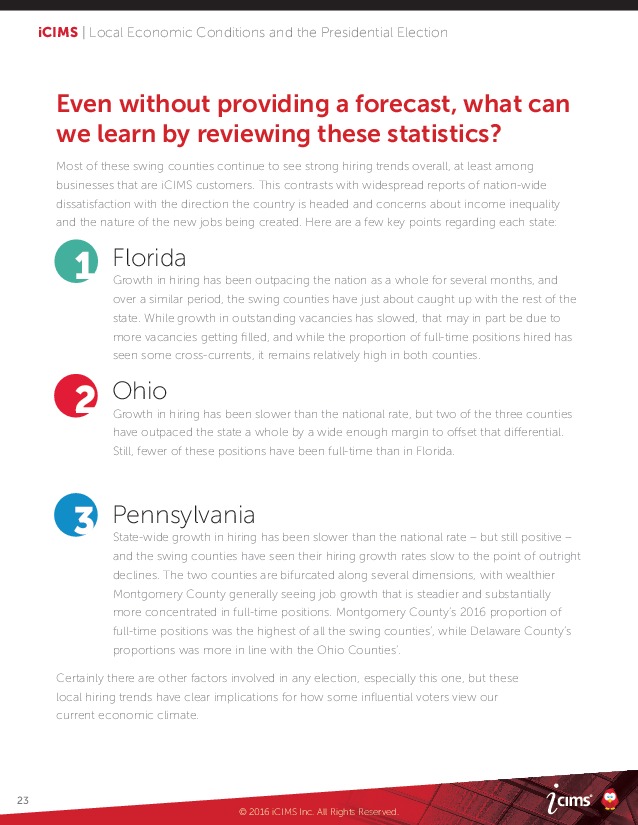 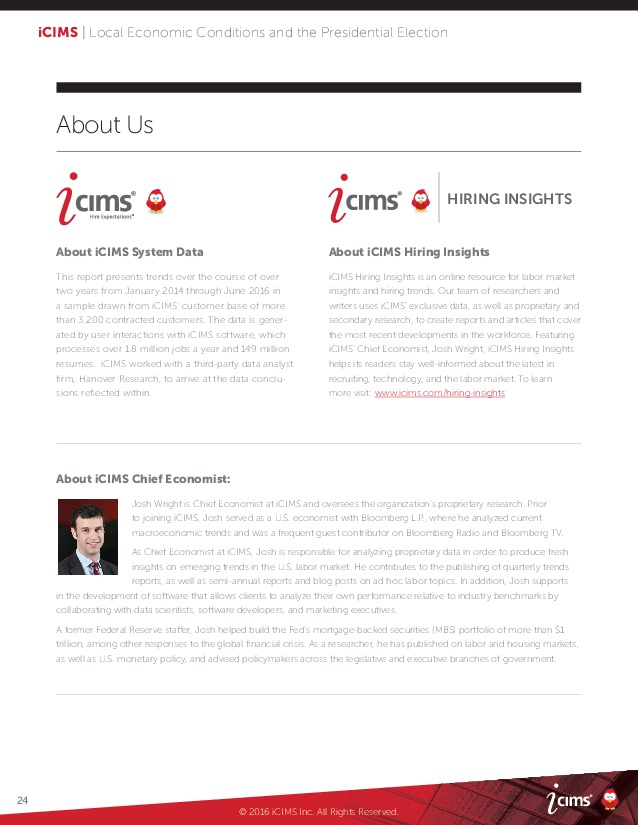