Why Soft Skills Are More Important Than Ever Before 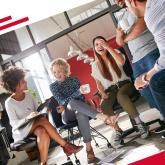 If you want to hire the best people for your business, put soft skills first, Forbes reports. But what are soft skills vs. hard skills? And what is the importance of soft skills in the workplace? How can you, as an employer, discern valuable soft skills in job seekers?

What are soft skills?

The term “soft skills” refers to such attributes as effective communication, time management, problem solving, working with teams, selling, negotiating and overall working well with others, according to the Huffington Post.

Based on iCIMS system data, the top ten soft skills and personality traits recruiters are using to describe candidates are:

iCIMS proprietary research found that the top three soft skills recruiters are looking for when hiring candidates are problem-solving, adaptability and time management. Despite being difficult to quantify, soft skills have a large impact on the value an employee brings to your organization.

Hard skills refer to teachable skills that can be defined and measured, such as knowledge of a software program. More emphasis has often been put on job seekers to develop and nurture hard skills, with soft skills historically being underrated. The Ladders states that although a set of hard skills is necessary for a career, soft skills are what bring an employee’s performance to life. According to iCIMS proprietary research, one in three recruiting professionals believe candidates’ soft skills have declined in the last five years; as such, 97 percent of recruiting professionals agree that both parents and colleges need to do a better job of teaching students soft skills before they enter the workforce.

Importance of soft skills in the workplace

Steve Jobs famously insisted that technology alone is not enough. We desperately need the expertise of those who are educated to the human, cultural and social as reported by The Washington Post. Jobs was also known as favoring passion over experience in his employees. After all, as stated in Reader’s Digest, passionate employees can manage themselves, understand the company’s mission and earnestly strive for a common goal.

Similarly, The Washington Post details a study conducted by Google. The study found that among the eight most important qualities of Google’s top employees, STEM (Science, Technology, Engineering, Math) expertise came in last despite Google being a pioneer and leader in the technology industry. All top seven characteristics of success at Google turned out to be soft skills. They include being a good coach, communicating and listening well, possessing insights into others, having empathy toward and being supportive of one’s colleagues, being a good critical thinker and problem solver and being able to make connections across complex ideas. In addition, the study found that the best teams at Google regularly exhibit the following soft skills: equality, generosity, curiosity toward the ideas of teammates, empathy, emotional intelligence and emotional safety. An additional study released by Google revealed that the company’s most important and productive new ideas come from teams comprised of employees who don’t always have to be the smartest people in the room.

In line with Steve Job’s assertions and Google’s findings, it’s time for all employers to recognize the importance of soft skills when searching for new hires in order to establis a positive and productive workplace. Forbes likewise emphasizes that excessive focus on hard skills isn’t the best way to optimize employees. It’s possible for the most intelligent and knowledgeable applicant to be a poor employee because he or she is not a team player, compassionate, dedicated or loyal.

Forbes goes into further detail regarding how employees with specific soft skills in conscientiousness and problem-solving positively impact the workplace: “Conscientiousness is particularly important for employees who are expected to work with a high degree of autonomy. It pretty much guarantees that when they are set a task, they’ll perform to the best of their abilities.” Additionally, problem-solving is a valued soft skill in the workplace because “a problem-solver notices when there is a problem, gathers together any information necessary to solve it, and compares potential solutions before intelligently applying the result of their analysis.”

How to distinguish soft skills in job seekers

Businesses have learned that hiring the wrong person is very costly. As such, many employers are putting the right technology in place to help them make smarter hiring decisions, according to iCIMS proprietary research. To ensure an applicant is a good match for a job, companies have incorporated video screening and pre-employment screening tests. Video screening can involve a recorded video cover letter or a live interview. Talent assessments are online questionnaires used to assess candidates’ personalities, work styles, knowledge or skills. Some employers also require job simulations, such as a writing test, as part of the interview process to determine how well an applicant would perform on the job.

“Hiring the right people is hard, and hiring the wrong people is expensive,” according to Forbes. Nonetheless, when organizations start giving soft skills the influence they deserve, the hiring process and the workplace will be positively transformed.

Attract, Engage and Retain Employees in the New Remote Work Era
Thursday, May 21, 2020
How to Adapt Your Entry-Level Hiring and University Recruiting This Summer
Wednesday, May 20, 2020
5 Lessons COVID-19 Taught Us on the Power of the Gig Economy
Thursday, May 14, 2020