What Can 'Game of Thrones' Teach Us About Recruiting? More Than You Think 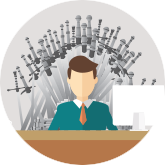 There is no doubt about it, Game of Thrones has taken the world by storm. With a record-breaking 8.9 million views of its season 6 finale episode alone, there is obviously something about the epic fantasy that keeps the viewers coming back for more. Now, with close to a year to wait until the premier of season 7, many are left to speculate on the bloody betrayals, scheming politics, and lusty rendezvous of their favorite characters.

As an avid watcher of the series, I am constantly in awe of the intricate ways the characters and plotlines reflect human nature. There truly is much to be learned from this fantasy world, with recruiters among the many groups that stand to learn a thing or two from the inhabitants of Westeros.

Whether you are a die-hard Game of Thrones fan, a recruiter, or both, you will no doubt recognize the following situations. Each a common challenge in the world of recruiting as well as in the Seven Kingdoms, here are a few lessons that recruiters can learn from this HBO epic.

This might sound obvious to some, but a lot of companies still do not put the investment toward recruiting that is necessary for success. Great companies are made of great people, and a well-supported recruitment program makes all the difference when it comes to meeting business goals.

Although her candidate of choice is seasoned warriors (not corporate workers), no one knows this lesson better than Daenerys Targaryen. Daenerys spends a lot of her time obtaining armies to support her in her claim to the throne, and although that is the goal of her enemies as well, no one is quite as successful as the Mother of Dragons. She knows that without the power of a capable talent behind her, she cannot succeed. Like any good hiring manager, she understands that her own personal skills and goals mean nothing without the support of incredible staff.

Watching Daenerys, through the seasons, struggle to obtain the best of the best, we see how important it is to spend the time, money, and effort in recruiting top talent. We see the sometimes slow process, but we also see the incredible results. Now, with the biggest army in Westeros, Daenerys is ready to reach her goals, just as any company needs top talent to reach its full potential.

The poster child for mentoring programs in Westeros is undoubtedly Arya Stark. Left to fend for herself at a young age in Westeros, Arya understands the importance of learning from others. In the earlier seasons, she finds a mentor in Syrio Forel, a fencing master tasked with instructing Arya on the fine art of swordplay. Later, in her many travels around the Seven Kingdoms, Arya finds the help of Jaqen H’ghar, the supposed leader of a group of assassins who takes Arya under his wing.

Without these mentors to guide her, Arya’s chances of survival in the deadly world of Game of Thrones would have been considerably lowered. The same can be said about new employees, although with much less dire consequences.

Employee onboarding is an important part of recruiting that companies just now are starting to appreciate. More and more companies are implementing engaging onboarding programs in an effort to increase retention and garner brand loyalty. Something to consider as part of your onboarding program is a developed mentoring network. New hires are often overwhelmed, so giving them a touch-point within the company will help ease their fears and ultimately result in a more productive new hire, faster.

Much like Arya, your new employees will thrive in an environment where skilled workers are available as mentors (just without the swords).

It’s All About Reputation

In the fantasy world of Westeros, reputation is everything. Little understand this lesson better than Jon Snow, bastard son of Lord Eddard Stark and member of the Night’s Watch. His reputation fluctuates from season to season, and his fate is almost always correlated with how he is perceived. It took some time, but Jon was eventually able to rebrand his bastard status and win favor over the Northern families as the head of house Stark – the most respected house in the North. Because of the reputation of the Stark name and his own powerful leadership skills, Jon was able to gain the support of some very powerful houses and take control of the Northern part of Westeros.

From powerful houses to powerful companies, the lesson is the same. In order to garner interest in your company, it is important to make sure your employer brand is well taken care of. How your company is perceived by candidates is just as important as how it is perceived by customers, as attracting the best talent to your company ultimately affects your bottom line. Taking care in building your employer brand is everything when it comes to hiring the best people for your company. Like the houses of the North, candidates want to work for companies they can trust.

So, while you wait anxiously for season 7 and debate fan theories with friends, remember there is more to Game of Thrones than meets the eye. While the stakes in recruiting aren’t life or death like in the Seven Kingdoms, keeping these lessons in mind could mean the difference between a successful recruiting program and one that falls flat.

How To Prepare For Rehiring. An iCIMS Customer Perspective
Monday, Jun 01, 2020
4 Reasons Your Offer Letter May Be Rejected and How to Avoid Them All
Friday, May 29, 2020
Attract, Engage and Retain Employees in the New Remote Work Era
Thursday, May 21, 2020