Ways Applicant Screening Software Can Help You Recruit an A-Team 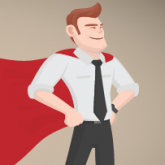 Greater than the sum of their awe-inspiring parts, the Justice League handles threats too massive for any single hero. Made up of the World’s Greatest Super Heroes, their membership inflates and contracts around each new threat…

Wait…the slogan for the Justice League is a recruitment tagline? Superheroes recruit too? Well, if you think about it, it makes sense. There are so many superhero teams out there in both the Marvel and DC universes. Comic book teams include: Justice League, Avengers, X-Men, the Order, Defenders, Midnight Sons, Guardians of the Galaxy, Fantastic Four, Illuminati, and Suicide Squad. These teams exist because even comic book writers know every job, whether it’s stocking the new red cups at Starbucks or saving the world from evil, requires the right person for the job. And sometimes it’s not simply a one-person job, sometimes recruiters need to fill numerous spaces to get the job done. Because as comics have taught us when we are faced with a job too great for one person, a team must assemble…cue the Avengers.

So how do these superheroes – or villains – know who is the best fit for their team? Do they use an applicant tracking system (ATS)? Sort of. Superheroes and their leaders actively seek top talent by studying candidates’ resumes, backgrounds, and skill sets. This is a crucial part of the recruitment process as it allows the recruiter to screen applicants properly. For instance, comic book character Amanda Waller, founder of the infamous Task Force X a.k.a. Suicide Squad, recruits the unlikely team based on their unique talents. Waller hunts for potential candidates by searching for individuals who will fill gaps in her pipeline (such as delinquents who have perfect aim or are possessed by an evil spirit). Waller can identify these exclusive candidates by both searching online and sourcing for candidates through referral programs. Employee referral programs allow recruiters to receive advice from fellow teammates and trusted sources. Further, if Waller decided to expand the project she could attract candidates by using powerful job board posting features in order to get jobs in front of a larger audience. Job board posting capabilities automate postings and reach more qualified job seekers without exhausting time and effort. Ultimately, these ATS screening functionalities enable Waller to staff a team of misfit heathens in order to complete a job that no one else can do, i.e. Waller successfully recruits using ATS methods: find, screen, recruit.

Waller is not the only recruiter out in the comic world. For instance, at the end of Suicide Squad Waller reveals to Bruce Wayne (Batman) that there is new talent to be aware of (metahumans). These potential candidates are on Waller’s radar and she is “connecting” with them in order to use them at a later time. Connecting with talent is vital to the recruiting process and is another way ATS systems can help recruiters identify the right fit for future open jobs. Waller knew that these metahumans were not ideal for her current project to save Midway City because she needed expendable, ruthless assassins, not “do-good” heroes. Instead, Waller collected data on these candidates and saved them to her talent pipeline – she knows she may eventually need some “good guys” on her side. Similarly, a talent pipeline allows recruiters to keep potential candidates “warm” so they can develop a relationship and save them for when the time is right. In this scenario, Waller’s tracking of metahumans like Aquaman and Barry Allen (the Flash) alludes to the formation of the Justice League (set to be released in Fall 2017). The pending movie’s premise surrounds Bruce Wayne’s efforts as he “connects” with the metahumans in order to shut down Waller’s madman ensemble. Hence, you guessed it, Batman is now a recruiter too.

Further evidence that Batman is currently recruiting occurs at the end of Batman v Superman when Wayne tells Diana Price (Wonder Woman) that he is gathering the rest of the metahumans revealed in Lex Luther’s files. Batman joined the recruitment field like Waller, Luther, and others such as the Avenger’s Nick Fury in order to fill pending open roles. Key takeaway: keeping a pipeline like Batman’s is a good way to save time-to-fill – or save the world.

What does this all mean? It means recruitment works even in alternate universes. When you think about it, each and every superhero or villain movie contains some element of recruitment. Whether they try to recruit for good or evil is not the point. The process and results are key.

These newly formed teams not only successfully assemble and accomplish their missions, but they open the gate for new teams to form. Or in Hollywood’s eyes, new movies to be produced. Marvel’s most recent movie, Dr. Strange – another movie about a candidate recruited to fulfill a mission and also a comic character who joins various teams to complete missions throughout his tenure – had an opening weekend that raked in $85 million in the U.S. alone. According to Forbes, “’Doctor Strange’ also has the honor of becoming the 14th consecutive Marvel movie to open in the top spot at the box office”. Therefore, not only can applying superhero recruiting techniques to applicant screening software work in the recruitment process, but it also can be quite a story to tell. The result of recruiting the right talent at the right time is a blockbuster in its own right. Make your own best-selling recruitment story by using ATS features to your advantage just like other superhero recruiters do and find your own A-Team!