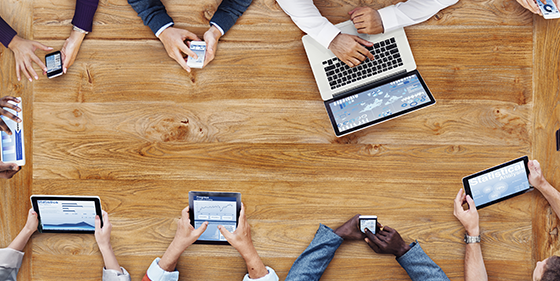 The April jobs report was nothing if not mixed, with most of the eye-catching action in the household survey. Payroll growth seemed to return to medium-term trends, while the unemployment rate broke to an 18-year low amid some conflicting signals from U.S. workers. Most notably, the wage/unemployment conundrum was heightened, setting the stage for policy makers to push back against financial market complacency.

There was lots of material in the household survey for the proverbial two-handed economist to grab onto. Unemployment declined, but labor force participation sagged once again, to 62.8% from 62.9%. Certainly we’d like to see labor force participation sustain recent gains (even if its outlook remains dim), but especially in a month with declining unemployment. The decline in involuntary part-time was a good surprise, as it brought the "U6" undermployment rate down to 7.8% from 8.0% -- its lowest level since July 2001. Also, it was encouraging to see long-term unemployment continue to decline… Yet it was not great to see job leavers decline 49k, since job-hopping is a prime source of wage gains. 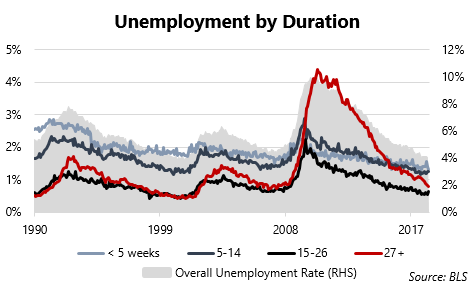 While it’s risky to over-interpret any single report, especially in the less-reliable household survey, there were some indications that generation Z is investing intself. While labor force participation increased for those without a high school diploma, it decreased for teenagers, suggesting teens are more willing to forego current job offers and invest in education or so-called upskilling. Consistent with this, unemployment declined for teens but rose for the diploma-less aged 25 and up.

Turning to the establishment survey, the 3-month average for payroll growth remains near the range of 150k-200k that has mostly held since early 2016. Payroll growth may be resuming its prior moderation toward demographic trends, and how much recent fiscal stimulus can delay that convergence remains to be seen.

Most of the headline acceleration in job gains came from construction (17k vs. -10k), other services (14k versus 2k), and temp work (10.3k versus - 2.1k prior). That last one augurs well for job growth over the next couple of months. It was encouraging to see manufacturing payrolls continue to grow robustly (24k versus 22k, and 31k before that), although that might not flatter manufacturing productivity. The decline in the employment diffusion index still left it at a healthy level (57.6 versus 64.1) and also argues against the notion that the labor market is overheating.

This report splashes a little cold water on the notion that wages are on the verge of accelerating non-linearly and that the Fed risks falling behind the curve, as some have recently implied. Hourly earnings growth over year-ago levels fell back to its average from the prior 12 months, and besides, the Fed has set itself up nicely to accelerate hikes when necessary.

Subsiding hourly earnings growth should soothe the market, but policy makers will be eager to ensure that markets don’t lapse into complacency. The Fed will take these earnings figures with a grain of salt given the inherent volatility in that measure, but especially after the Q1 Employment Cost Index printed at post-recession high of 2.9%. There's little doubt that wage pressures are rising as the labor market continues to tighten, but it remains to be seen whether and when they will jump sharply, given ongoing shifts in productivity and demographic trends, as well as overseas competition.

With these discrepancies in economic data – super-low unemployment + meh wage growth – the Fed will have to rely on speculation to some extent for guidance. Get ready for more talk of r*, NAIRU, the Phillips curve, and global capacity, in addition to the burgeoning debate about what exactly a symmetric inflation target means. More pressingly, get ready for the Fed to remain vigilant in keeping alive the possibility of a fourth hike in December.