Given all the ink that’s been spilled over the debate on skills gaps and the relationship between job openings and hires, it’s surprising how little air time some basic facts have received. If you’ve followed this debate, you’ve no doubt seen some version of the following chart a great many times. 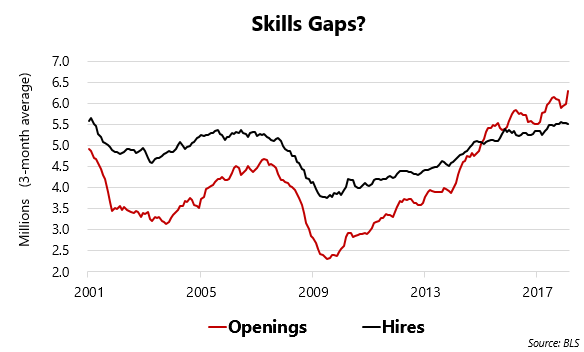 As you can see, something funny happened to the relationship between job openings and hires: it has inverted. Since no one else seems to have bothered to come up with a name for this specific development – and corrections on this point would be welcome – I’m taking the liberty of creating my own shorthand by referring to this as the “hiring deficit.”

All those additional vacant positions have generally been cited as Exhibit A in favor of a skills gap: more positions are being left unfilled because the U.S. labor market simply doesn’t contain enough people with the right skills to fill them. This argument has a lot of intuitive appeal, given the rapid pace of technological change the U.S. economy continues to experience (Enjoy? Endure? Depends on the perspective you take). At one point, this was a real point of contention for the Washington / Wall Street axis of policy makers and financial markets. The hawks (those who wanted to see higher rates) claimed skills gaps stood in the way of further progress on labor market conditions, so the Fed should just get on with rate hikes. The doves (those who wanted to see lower rates) pointed out that if employers were really so hard up, they ought to broadcast their need more concretely and go out and land some talent by raising the wages on offer. The doves also noted some differing rates of job growth across industries.

What I haven’t seen yet is a straightforward comparison of different industries’ contributions to the aggregate hiring deficit. When I did so, the results were striking. In March 2018, over three quarters of that deficit could be attributed to just three industries. 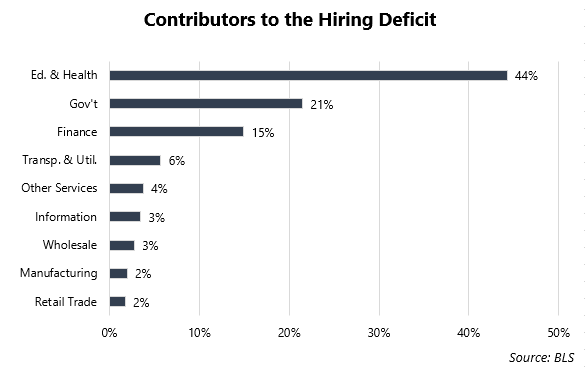 In contrast, I found only four industries with a hiring surplus (monthly hires > monthly openings). 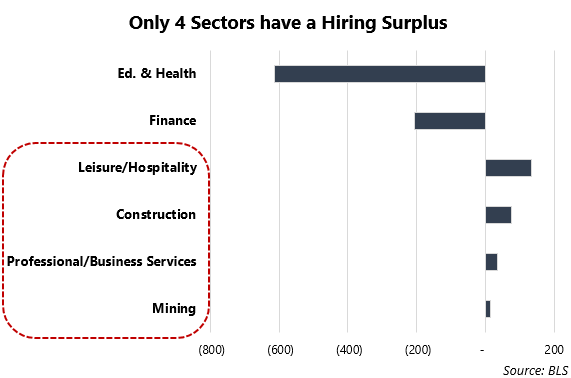 What does this mean for the debate? In support of a skills gap, it looks like there is a broad-based trend – there was a hiring deficit in most industries. On the other hand, I haven’t heard many people arguing that we don’t have enough people qualified for government work. We do hear a lot about the nursing shortage, but not that it dwarfs shortages in other industries by quite so much — particularly not the shortages in software engineers and data scientists. Finance is an interesting case. The financial industry got bloated a decade ago, which suggests it should not be starved for skilled talent, but then software technology has been invading this industry pretty rapidly and all the changes in regulation of finance and data privacy in recent years have generated demand for new kinds of positions.

It’s worth noting that healthcare, finance, and government are known as relatively conservative industries, including in their recruiting, so their apparent hiring deficits may also reflect idiosyncracies in how they are responding to the combination of a tight labor market and technological changes in the world of recruiting itself. Whatever is going on here, it looks more complicated than purely a question of skills gaps. 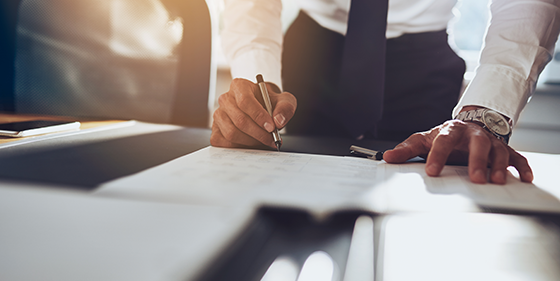