When the weather cools down, holiday hiring heats up, as retailers prepare for the busiest time of the year. From clothing and electronics to food and furniture stores, retailers begin the hunt for holiday workers earlier and earlier every year to keep pace with increasingly antsy shoppers. However, retailers face stiff competition for holiday workers from more than each other these days, as several economic factors threaten to deplete the supply of seasonal employees, including a declining unemployment rate and the rise of the gig economy.

With the lion’s share of annual sales on the line and plenty of help wanted, retailers need to stay competitive in the war for top holiday talent. By using the right talent acquisition technology, they can streamline the hiring process and gain a competitive edge that will turn the tables in their favor again. “The main problem retailers are having right now is the fact that there are a lot of openings within the industry, but not enough people qualified to take on such jobs,” said Ana Serafin Smith, a spokeswoman for the National Retail Federation (NRF), a Washington, D.C.-based lobbyist group.

Retailers will make $655.8 billion in sales this holiday season, up 3.6 percent from the $632.8 billion that they made in 2015, according to NRF’s annual forecast. Meanwhile, they will hire 640,000 to 690,000 holiday workers this year, which falls in line with the 675,300 seasonal employees that they hired last year, also according to the forecast. However, many retailers project that they will do more hiring this year than they did last year, as 48 percent of the retail industry’s hiring managers plan to increase their number of seasonal employees by an average of 20 percent, according to iCIMS. “The fourth quarter for any retailer …is the one that will typically make for a successful year or an unsuccessful year,” said Cindi Bruner, senior director of human resources at Lucky Brand, a Los Angeles-based fashion retailer and an iCIMS customer.

Lucky Brand began planning for holiday hiring in August and accepting applications in early October, as it mostly needs cashiers and sales associates for its 260 stores in the U.S. and Canada. The retailer’s regular employee base consists of roughly 2,800 employees, but it will swell by nearly 40 percent to an estimated 4,500 employees at the peak of its holiday hiring shortly before Christmas. “It’s competitive every year, but it’s even more competitive now,” Bruner said. “Everyone is being very aggressive about finding seasonal and good talent. It’s just tough all around.” The company uses a combination of old and new tools to promote its holiday jobs, including signs, job boards, and social media. “We’re also encouraging our own employees to help us with social media (by) posting and reposting (to) their own networks,” Bruner said.

With so many job openings at one time, Lucky Brand typically receives an influx of applications, so it uses iCIMS Recruit to sort through them. Following training sessions at corporate headquarters, the retailer provides its store and district managers with access to the applicant tracking system (ATS). The company’s store managers then use the ATS to routinely review applications, while its district managers often use it to share candidates with each other depending on demand and proximity.

Lucky Brand also uses iCIMS Onboard to maintain a paperless onboarding process that it designed specifically for its holiday workers, of which it retains roughly 20 percent after the holidays. “That’s probably one of the best things that iCIMS has done for us,” Bruner said. “We are able to conduct all of our onboarding electronically. Up until two years ago, we were using paper.” The retailer uses the software to distinguish holiday workers from regular employees, as seasonal hires often require fewer employment forms, which may differ by state. “I never had that (capability) before,” Bruner said. “That feels really good (for) us.”

If you would like to learn more about the talent acquisition technology that retailers need to succeed at holiday hiring, then check out iCIMS’ infographic. 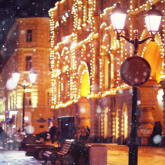