Recruit in the modern world and expand your reach with built-in virtual interviewing.

Give your business a competitive edge with a complete solution for creating personalized, timely, and accurate digital offer letters that inspire candidates to want to join your team.

Watch the recording of our latest webinar looking at key findings from a recent study and explore short-term and long-term solutions for the talent crisis in 2022 and beyond. 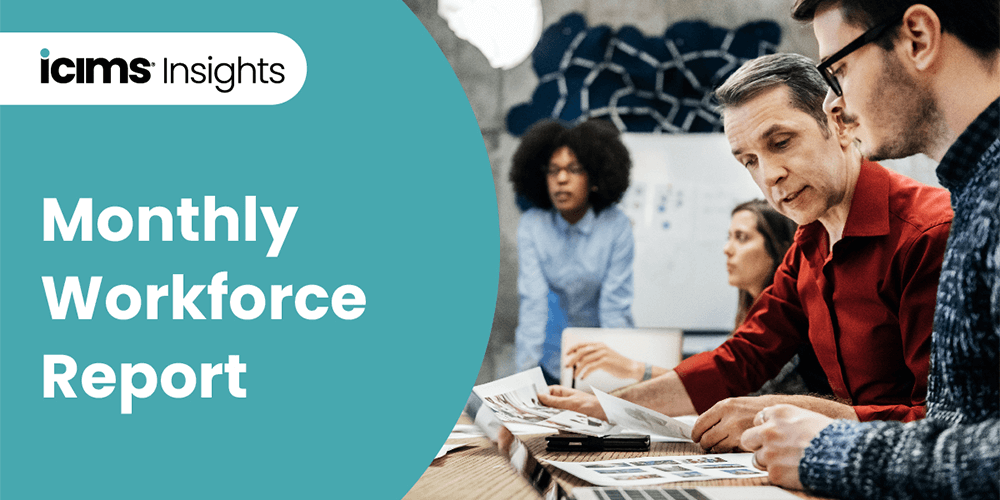 February brought a dip in job opening and hiring activity and job seekers began to pull back as well, according to the iCIMS March Insights report. ​ While slightly down, overall numbers are still trending above 2021 levels.

Historically, the second month of the year brings with it a decrease in activity, so these downswings may be nothing more than a seasonal trend. However, as talent challenges continue, employers need to deploy more strategic approaches to attract talent – especially to higher paying jobs. ​

iCIMS March Insights report provides a look into the latest labor market activity and trends drawn from our database of employer and job seeker activity.

The state of the talent market

Despite the seasonal decline, job opening activity was still trending well above last year at this time, with job openings up 44% since January 2021. Hires were up 36% during that same time period. With time-to-fill around six weeks, we may see increases here soon as a result of the influx of applications in January, the report indicated. Job application activity was on par with January 2021 levels, which was higher than we saw for most of the last year.

“We saw broad-based gains in every sector — in trucking, warehousing, construction, leisure and hospitality, even in nursing homes,” Labor Secretary Marty Walsh said in an interview with The Washington Post. “Ninety percent of the jobs lost in March and April of 2020 have been recovered.”

Lower wage job seekers are the most active job applicants

When we look at application activity broken down by the salary of the jobs being applied to, our data shows a decrease in applications in higher paying positions. However, applications to jobs paying less than $50k were up 1% since January 2021 – making this cohort of job seekers the most active talent pool.

Despite application volume, hires into six-figure jobs have increased 47% since January 2021 – while hires into jobs paying less than $50,000 have only increased 35%.

Women continue to reenter the workforce

Get the strategies you need to help navigate 2022’s challenges of hiring and retention. Watch webinar.

The generational composition of the workforce today

There is little variation in the generational composition of job seekers across industries. In all industry sectors, iCIMS data shows that nearly a third of applicants were under 25, and more than half were under the age of 35.

“People are coming back to work,” Nick Bunker, an economist at the jobs site Indeed, told The Washington Post. “We’ve been seeing this trend since last fall, but it’s become very stark recently, particularly among people of prime working age, between 25 and 54.”

Gen Z job applicants continue to be the largest segment of the talent pool but also the ones most likely to apply for a position after visiting an employer’s career site. According to our report, candidates under 25 on average spend 7-11% longer on career sites than older age groups. Of those 18–24-year-old job seekers, 21.5% were more likely to apply for a position.

Those younger job candidates are also more likely to consider changing jobs, according to a new Microsoft report that surveyed 31,102 employees between January and February.

“This is a group that approaches work differently than the generations before them,” Karin Kimbrough, LinkedIn’s chief economist, told CNBC. “They work just as hard and are just as motivated to excel in their careers, but they are more open to talking about mental health, work-life balance and companies to engage in social issues.”